For today’s edition of Babyology, I thought I’d offer ten lessons/tips that I have learned about starting infants on solids.

1. In the beginning, it takes 15 or so tries of giving a baby a new food before you can definitively know their opinion on it. After three “unsuccessful” tries and pureed sweet potatoes down the drain, I concluded “Oh, she must hate sweet potatoes.” This “truth,” of course, set in my motherhood paranoia and led me down a mental trip of guilt of her one day becoming that “chubby kid” who only ate McDonalds and couldn’t make it up the hill at camp. (sigh). Over time, I realized in giving her the same foods other and other again that it wasn’t that she didn’t like, for instance sweet potatoes. It was just that sweet potatoes and all the other weird veggies that I was giving her were so different from breastmilk. Once she became used to the texture, taste, smell of these veggies, she loved them. Now that she is older, it is much easier to introduce her to new solids.

2. Solids are ok.  I was (and still am) in denial about my daughter’s interest in 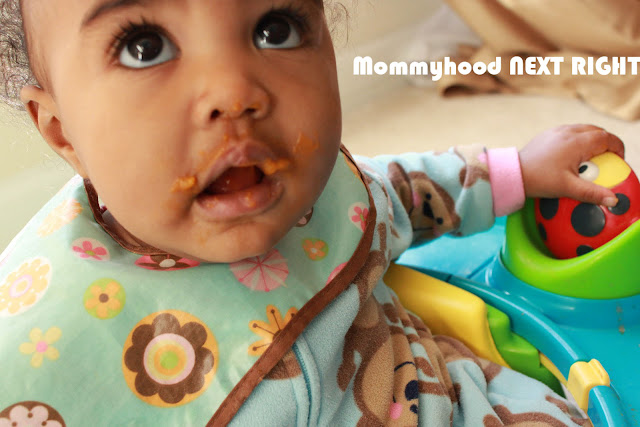 solids. I have to tell myself often that in her starting solids, it does not mean that she is rejecting me as her “other food source.”

3. Spoons are weird objects to a baby. Can you imagine someone attempting to shove an unfamiliar object into your mouth? (I hope you answered “no” to this one.) Whenever I would give Nya solids in the beginning, she would attempt to wrestle the spoon out of my hand. I would like to say that she was always unsuccessful in her attempts, but, hey, even for a six month old, she is a strong girl with a very good grip. Once I figured out how weird having a spoon in your mouth for the first time could be, I made an effort to first get her used to the idea. When giving solids, I would take out two spoons, one for her to play around with in her mouth and another for me to use to feed. I also randomly gave her spoons throughout the day for her to play with. She now is less interested in grabbing the spoon and understands that spoons are ok to go in the mouth.

4. Do not give solids on carpeted surfaces. I learned this one the hard way. In the beginning, I thought it would be a good idea to just put Nya in her Bumbo seat in our carpeted living room for each meal. By the end of each meal, needless to say, there would be stains, crumbs, spit up in the surrounding area. If you do feed your baby on carpeted surfaces, use a tarp or towel beneath where the baby is sitting.

5. Babies like peas. Peas were the first (and I think only) food that Nya liked on the first try. If you are not having much success with the standard sweet potatoes, carrots, bananas, or applesauce, give peas a try.

6. Be prepared for stinkier, thicker poop. I miss the days of Nya’s exclusively breastfed poop. In one of my fondest memories in the beginning of her life were changing her very mustard colored, vanilla cake mix smelling poop. (sigh) I can’t say that her poop rivals that released by my uncle after thanksgiving dinner, but it is definitely more smelly than before. The consistency of her poop has also changed from runny yogurt to thick toothpaste/peanut butter.

7. Your baby will always seem more interested in what you are eating than what they have in their colorful bowls. Even if it is the same thing (albeit pureed beyond recognition from its original form).

8. Water proof plastic bibs are the way to go! I used to used the cloth bibs that you can buy in bulk from Babies R’ Us. That is until I realized, as a result of a “necessary” trip to Target, that some genius had invented an alternative. The plastic bibs are easier to clean and seem to “catch” more food.

9. When using solids to complement nursing, it is easiest to create a flexible schedule for yourself. Before creating a schedule, I could never figure out when to offer solids. I always worried that I was feeding her too much or not enough. I used this schedule by mother-2-mother as my guide and revised it to my liking.

10. Make your own rules! Go with what works for your baby. Don’t worry as much about how things should be.

As Nya matures, I continue to learn more and more solids. She is now eating veggie and fruit-based purees, oatmeal, and cereal but I plan to incorporate more textures and protein.

What lessons have you learned about giving solids? What foods did your children enjoy?

I’m a professional writer and grad student turned stay at home mom who loves writing, pretty things, and laughing out loud.I have a little girl named Nya and a baby on the way (due in October). At Mommyhood NEXT Right, I blog about my journey through motherhood, my on and off again career, parenting joys and troubles, marriage, pregnancy, and life.